We had such a fun day today!! And we didn’t have to get into a dangerous situation either! Win, win!

I was up super early and went out for a walk to see the sunrise. I ended up meeting a nice woman named Pam from Cali who owns a house here and just arrived for the next two months with her Great Dane service dog and her veterinarian husband. We chatted for over an hour!!! Fortunately, Mike caught some great shots of the sun peeking up over the horizon while Pam and I were deep in discussion and clearly oblivious to it.

We lounged around the house till about 10 am this morning enjoying the sun and the tides going out. It was a beautiful morning and the wildlife seemed especially active. I caught glimpses of some big crabs along the rocks during my second walk of the day, this time right in the pools at low tide, and then Dan and I spent 30 minutes watching a large bird try to fish from our pond. We leaned over the balcony of our lanai throwing Life Cereal to the already fat tilapia in our tide pool 15 feet below us, trying to gather them up in one place so that we could watch the bird catch his breakfast.  Either he wasn’t hungry enough, or was too scared or lazy to make much of an effort because even when he was so close to them he never really went for it.  I have about 20 one minute clips of this timid, beautiful bird watching the tilapia eat Life Cereal now taking up lots of space on my iPhone in case anyone is interested.

We drove up to Hilo and enjoyed the beautiful Banyan Tree Drive, with its gorgeous park, taking in the majesty of these giant trees.

Looking up through a banyon tree.

We took a chance at the Hilo Bay Cafe and had a delicious meal there while overlooking the ocean. Honestly, Hilo Bay pales in comparison to the other bays that we have seen on this trip (Hanalei and Kealakekua) But still, it was nice to look out over the water while we ate.

We then hopped over to Hilo’s famous farmer’s market, full of all kinds of goodies of the fruit, vegetable and tchotchke variety, for a little shopping. Our last stop there was Hilo Ukulele and Guitar shop, where Mike bought me my first ukulele.  We went in expecting to the find the same people but instead met the new owner as of this year.  He had rearranged the store and didn’t have nearly the inventory but he was extremely nice and let me fiddle around with all the different ones he had in stock.  He was impressed that Dallas actually had some ukulele teachers and we talked for a while about how popular the instrument has gotten in the last 10 years.

The lady in the tye dye shirt saw Mike with his camera and wanted to make sure there was a shaka in the picture.

Our next stop was the University of Hawaii at Hilo.  Not that Dan would have much interest in attending there (although it would be a good choice if he were interested in astronomy) but it was fun to check out the bookstore and see the pretty grounds.

As we started to drive south back toward our house, we almost forgot to stop at the Mauna Loa Macadamia Nut Factory and Visitor’s Center.

After turning off of the highway, the 3 mile drive in the middle of 2,500 acres of with 250,000 macadamia nut trees was quite a site. Long tall Cook pines carve out sections of the orchard and line the road as if to escort you to their plant near the ocean.  While Mauna Loa has mac nut farms in other places, this is the only processing facility they own.  It was quite fascinating to see how they prepare, literally, all of their macs for shipment, but mostly we laughed the entire time we were there over all the ‘nut’ jokes that we were secretly telling each other.

Back home, just in time for high tide, Mike and Dan took a quick dip into the now huge tide pools and came up with exciting news. Dan finally saw, swam with, and captured an image of a timid sea turtle swimming. He was so happy to check that off of his to-do list before we left.  Here are the pics for proof.

Finally the evening came and Dan and I drove off together, leaving Mike and Casey to chill at home. Casey was so well behaved on our exploratory day trip but we knew we shouldn’t push our luck and send her back out to go another 30 miles round trip, for something that I am pretty sure she would just barely tolerate. (Mike was perfectly happy to stay home and relax, too.) We had heard so much about Uncle Robert’s from everyone on this side of the island that I had to see it for myself.  I now understand why it is so hard to describe.

While the sign says no using or selling of drugs, I’m guessing they are a little loose about that rule, given that half a dozen people were sitting around the taco stand at 8:30 am looking very very relaxed.)

If I was forced to give an honest effort at describing what it was like, I would have to say hippie street festival probably most accurately describes it for me. Actually, the event started as a Farmer’s Market, the only one on the island that happens at night after work.  There seemed to be way more locals than tourists there, and I am guessing that ratio aptly represents this area of the island.  The southeast part of the Big Island is definitely not your typical touristy area.  In fact, the famous Kohala Coast, where you can usually find my family when we visit, could be another country compared to this very rural, very traditional, very Hawaiian community.

I found out about Uncle Robert’s, not from any travel guide book, but from several neighbors we met.  Uncle Robert, who owns the 4 acre compound on which this event takes place, is the local patriarch, or kapuna, of the Kalapana community, and seems to know and love everyone around here. His land was barely spared the devastation of the lava flow of 1990.  Grateful, he has taken great care of the land and the surrounding community and now several of his 11 children and some grandchildren live off the land with him.  He was up there on the stage playing in the Awa Band, while the MC (a cute Japanese woman, who, I am guessing from my talks with some locals and a little bit of internet research, might be his wife) stood on stage with her little Aloha fan, dancing and smiling the entire time.  There were hula dancers, fire dancers, a United Nations array of food options, and of course, all kinds of vendors from jewelry to essential oils to something akin to a travelling head shop.  I got a bit concerned at one point that the locals might not be thrilled to have tourists at this type of event, but I felt nothing but the Aloha spirit there. Ok, maybe there was a little too much of the Aloha spirit there for me personally. None the less, I did enjoy this opportunity to experience Hawaii like the true locals do. 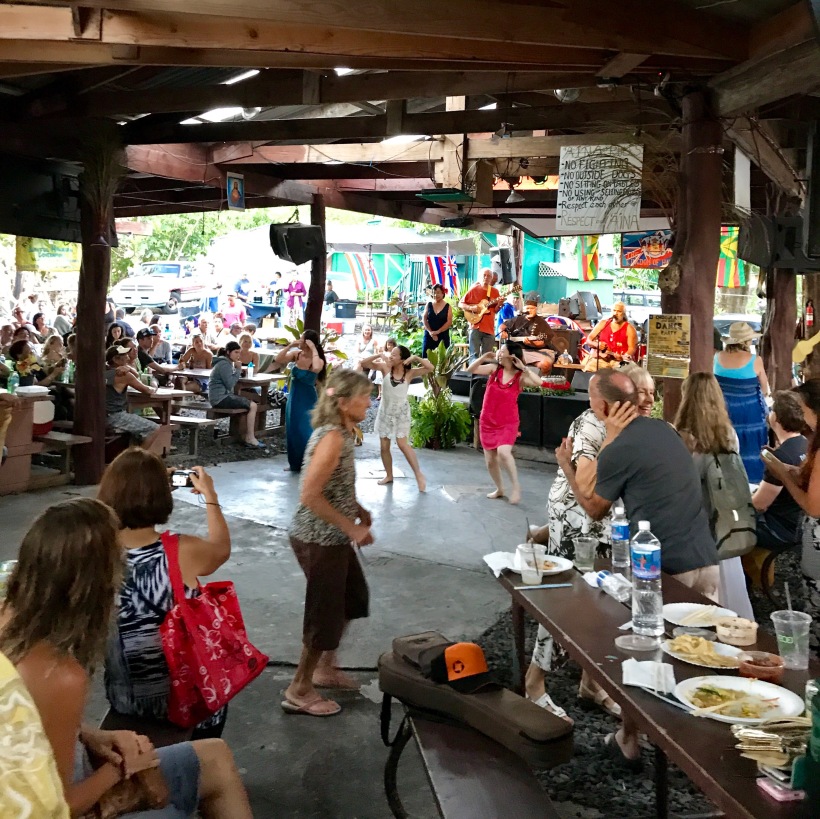 At one point, Dan wanted a coconut so we stopped at a truck where a young man was chopping them up and serving them as drinks. We chatted with him for a while and found out that he is 15, moved here 5 years ago, was always getting into trouble for climbing on things so he turned it into a business a couple years ago. Now he climbs coconut trees up to 70 feet tall, chops the nuts down with a machete and sells them at markets like these. Dan thought he was a pretty cool kid. He was quite the charming entrepreneur.  Later as we were leaving, he said goodbye to us and I accidentally called him Max. Not sure how I came up with that since his name was Sequoia.

It’s good to know that I still have the skills to embarrass my son.